The Votes have come in,
and we've got a winner! 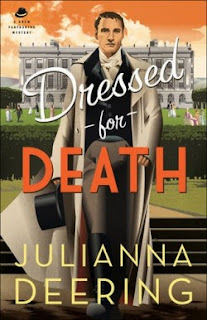 DRESSED FOR DEATH
by Julianna Deering

JULIANNA DEERING has always been an avid reader and a lover of storytelling, whether on the page, the screen or the stage. This, along with her keen interest in history and her Christian faith, shows in her tales of love, forgiveness and triumph over adversity. A fifth-generation Texan, she makes her home north of Dallas with three spoiled cats and, when not writing, spends her free time quilting, cross stitching and watching NHL hockey. Her new series of Drew Farthering mysteries set in 1930s England debuted from Bethany House with Rules of Murder (2013) and is followed by Death by the Book and Murder at the Mikado (2014), Dressed for Death (2016) and Murder on the Moor (Coming 2017). Also, as DeAnna Julie Dodson, she has written a trilogy of medieval romances (In Honor Bound, By Love Redeemed and To Grace Surrendered) and six contemporary mysteries for Annie’s Fiction. She is represented by Wendy Lawton of the Books & Such Literary Agency (www.booksandsuch.biz).


Find her On the web:

Dressed for Death Back cover:

A Regency-Era Costume Party Should Have Been an Amusing Diversion, But it Seems Wherever Drew Farthering Goes, Mystery--and Murder--Are on the Guest List

Drew and Madeline Farthering arrive at a Regency-era house party at Winteroak House, excited to be reunited with old friends, including Drew's former Oxford classmate Talbot Cummins. Tal is there with his fiancée, Alice Henley, and though many present seem worried about the couple, nobody is prepared when Alice dies from an apparent overdose. Tal refuses to believe she'd taken the drugs intentionally, and a dark question arises of whether the death is an accident or murder.

The police have their own information though, and Drew is shocked when they arrest someone he's trusted and admired since his childhood--someone who's been smuggling drugs into the country for years. Stunned by what has happened, Tal begs Drew to get to the bottom of everything, but Drew has never felt more unsettled. Questioning his own ability to see people as they really are, Drew doesn't know whom to trust, and he's not ready for the secrets he's about to uncover--or the danger he'll bring down on everyone he holds dear.


This sounds like such a FANTASTIC read! Ready to dive in? Want to peek at the sample? It's right here:


Murder on the Moor

At the urgent request of Drew's old school friend, Hubert "Beaky" Bloodworth, Drew and Madeline Farthering come to Bloodworth Park Lodge in the midst of the Yorkshire moors, a place as moody and mysterious as a Brontë hero. According to Beaky, there have been several incidents of mischief making out on the moor, property destroyed, fires started, streams dammed up, sheep and cattle scattered and, if local gossip is to be believed, the sighting of the shadowy figure of a great black hound. Worst of all, the vicar has been found dead on the steps of the church, and no one can imagine who would want to kill him.

Beaky is obviously smitten with his wife of eight months, the gorgeous and vivacious Sabrina Bloodworth, though it's hard to imagine what she sees in a man as awkward and plain as he. Drew can't help wondering if Sabrina's affections lie more with Beaky's money than himself and, just perhaps, with the fiery Welsh gamekeeper, Rhys Delwyn. Delwyn says poachers are to blame for the recent trouble, Sabrina claims the moor is haunted, and Beaky suspects that Carter Gray, a neighboring landowner with a longstanding grudge against the Bloodworths, is behind the episodes. But when someone else is murdered and the troubling incidents grow more threatening, Drew begins to suspect local ne'er-do-well Jack Midgley of more than poaching. But just how does Midgley fit into the scheme and who is paying him? It's up to Drew to look past his own prejudices, determine what is really going on, and find the killer before it's too late.


Would you like to see the cover for Murder on the Moor? Sign up for Drew’s News at http://www.juliannadeering.com/newsletter.php for exclusive series information and giveaways.

Have a blessed week, everyone!
From your friends at Clash of the Titles!
Posted by Delia Latham at 6:00 AM