About Married by Easter:

What happens when a desperate man seeks a 21st century marriage of convenience? 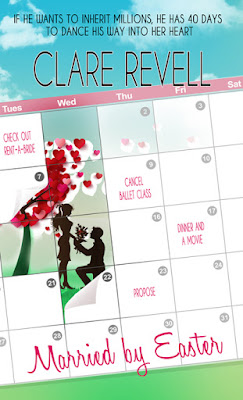 Confirmed bachelor, Nigel Turner, needs a wife in order to inherit his father's millions. And he needs one in short order. His only option—other than kidnapping, which is illegal—is to use the Internet site Rent-a-Bride.
Chloe Wilkes’s brother signs her up on Rent-a-Bride as a joke, but when Nigel's details end up in her inbox, she decides to get her own back, and reply.
Neither expects to fall in love with an arrangement that was meant to be temporary.

Excerpt:
Another email arrived. Chloe moved the mouse to delete, but instead opened it. She sighed. “Hello, Chloe. My name is Nigel. I read your profile and am contacting you as we are both Christians and have a lot of other things in common. I find myself in a bit of a fix and am hoping we can come to a mutually beneficial agreement. I’ve attached a picture of myself and hope to hear from you soon. Yours faithfully, Nigel Turner.” The email ended with a verse. The joy of the Lord is my strength. Nehemiah 8:10.
She scrolled down the page and looked at the photo.
“Wow.”
Close cropped wavy brown hair, a neat trimmed beard and the most amazing brown eyes she had ever seen. He wore a grey suit and brown tie with a bright white button down shirt. She picked up the bottle of water on the desk and drained it. Be still my heart, the bloke is a hunk. And a Christian.
But still a bloke nonetheless. How did she know he wasn’t a creep like the other emails she’d received?
She took a deep breath. She probably shouldn’t do this, but she was going to reply. “Hello, Nigel. I don’t make it a habit to advertise on sites like this, and I have no desire for a mutually beneficial anything with anyone. Especially when I know next to nothing about you. This is real life, not some trashy romance novel and a casual hook up.” She hit send.

Get your copy of Married by Easter:  Amazon US     Amazon UK      Pelican Book Group
Share a Tweet:  Can Nigel find the wife he needs in six weeks or will he lose his inheritance. Married by Easter by @ClareRevell from @pelican https://tinyurl.com/y8e42bkc


Clare is a British author. She lives in a small town just outside Reading, England with her husband, whom she married in 1992, their three children, and unfriendly mini-panther, aka Tilly the black cat. They have recently been joined by Hedwig and Sirius the guinea pigs. Clare is half English and half Welsh, which makes watching rugby interesting at times as it doesn’t matter who wins.
Writing from an early childhood and encouraged by her teachers, she graduated from rewriting fairy stories through fan fiction to using her own original characters and enjoys writing an eclectic mix of romance, crime fiction and children's stories. When she's not writing, she can be found reading, crocheting or doing the many piles of laundry the occupants of her house manage to make.
Her books are based in the UK, with a couple of exceptions, thus, although the spelling may be American in some of them, the books contain British language and terminology and the more recent ones are written in UK English.
The first draft of every novel is hand written.
She has been a Christian for more than half her life. She goes to Carey Baptist where she is one of four registrars.
She can be found at:
Website          Blog          Pinterest
Instagram      Amazon UK          Amazon.com
Pelican Book Group          Bookbub          Goodreads


She also has a newsletter. You can sign up for it HERE. Your email never gets passed on, and you won’t be inundated with mail either. It’s four maybe five times a year.
Posted by Delia Latham at 12:57 PM