Once again, I'm happy to welcome fellow Pelican Book Group author, Barbara M. Britton, to Chirp 'N Chatter. It is no less a pleasure this time than it was on her first visit. Today, Barbara will talk about the editing of Building Benjamin while on radiation therapy, and then...she'll introduce her brand new cover for the next book in the series, Jerusalem Rising: Adah's Journey. What fun to be the first to see this stunning cover!
In addition, Barbara will give away a copy of Building Benjamin to a commenter on this post. Winner's choice of digital or print format. So be sure to say hello in the comments. Let us know what you're thinking about this series...and about the new cover.

Building Benjamin...Through the Fire of Radiation 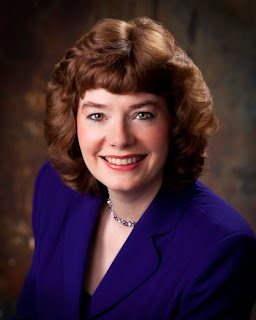 Thank you for having me on your blog today, Delia—Again!
In two days, my second novel in my Tribes of Israel series will release in print. I am a print book reader, so I am thrilled to actually hold this story in my hands. “Building Benjamin: Naomi’s Journey” was inspired by Judges 19-21 where the tribe of Benjamin is almost wiped out by the other tribes of Israel. I had no idea this story was in the Bible. A lot of chaos happens in these final chapters in Judges, and a lot of chaos happens to Naomi, Cuzbi, and Jael in my story.
But, God is at work to save the tribe of Benjamin. I’m happy He did! The apostle Paul is from the tribe of Benjamin as is Saul, the first king of Israel (although that didn’t work out as well).
If you open “Building Benjamin” to the acknowledgements page, you will see a list of doctors and medical professionals who helped save my life. We know God is the ultimate healer, but these surgeons and nurses and physical therapists gave me a chance to beat breast cancer. I’m optimistic my cancer will not return because I had radical surgery and radiation therapy. But even if it does, I know God is in control.
My radiation therapy was to catch and kill any cancer cells that were left behind from my surgery. It was during radiation therapy that I edited Naomi’s story. 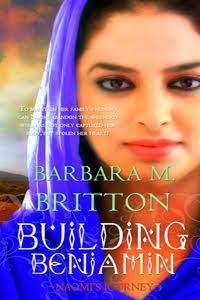 At first, I almost panicked to get my edits when I had to go to the hospital every day. Not to mention, I had to rest, drink water at every turn, and be a big grease ball of lotion to keep my skin from burning. I added a drop, or two, of Calendula oil to my lotion to prevent burning, so not only was I greasy, I was yellow! My edits were a blessing in disguise. I could turn my attention from cancer and oncology wards to something fun and rewarding—my writing.
God guided me through my cancer journey. He gave me peace and strength to battle the fear of the unknown. I’m not a big fan of needles, and God provided the grit for me to make it through many unpleasant procedures. The prayers of His saints were like a vitamin elixir every morning.
And while I was getting ready for Naomi and Eliab to have their day in the publishing sun, God gave me the idea for another story. Since Delia has been a huge support to me during my publishing career, I thought her readers might like to see the cover to my next Tribes of Israel novel. I’m sure Naomi won’t mind sharing her release day with Adah.
My next heroine is a daughter of Shallum who helped build the wall around the city of Jerusalem with Nehemiah. Adah’s story will release in November of 2017.
I’m happy to answer any questions about Naomi, Adah, or breast cancer. God is good!

Love Grows Where God Grafts the Tender Shoot.
Naomi desires to dance well enough to catch the eye of a wealthy landowner. Her father needs a substantial bride price due to the deaths of her brothers at the hands of the tribe of Benjamin. But when Benjamites raid the Ephraimite feast and capture young girls, Naomi is bound and carried from her home by Eliab, a troubled shepherd who needs a wife.
As Naomi awaits rescue, she finds Eliab has a strong faith in God and a just reason for abducting her. A reason that affects all the tribes of Israel. The future of the tribe of Benjamin hangs in the balance, but if Naomi follows her heart and stays with Eliab to rebuild his lineage, she must forfeit her family and become a traitor to her tribe. 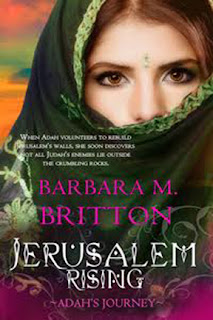 When Adah bat Shallum volunteers to rebuild Jerusalem’s wall, she soon discovers not all of Judah’s enemies lie outside the crumbling rocks.

Delia here: Isn't this cover gorgeous? I absolutely love it! All of the covers for the Tribes of Israel series have been breathtaking. Side by side, they're quite the eye-catching set of book covers. Don't you agree? :) 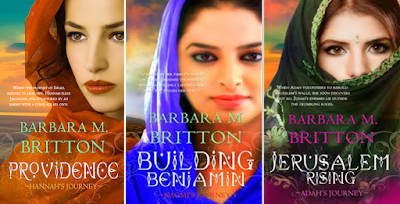 About the Author:
Barbara M. Britton was born and raised in the San Francisco Bay Area, but currently lives in Wisconsin and loves the snow—when it accumulates under three inches. She writes Christian Fiction for teens and adults. Barb has a nutrition degree from Baylor University but loves to dip healthy strawberries in chocolate. Barb kicked off her Tribes of Israel series in October with the release of “Providence: Hannah’s Journey.” Naomi’s journey, “Building Benjamin” is out now. Barb is a member of the American Christian Fiction Writers, the Society of Children’s Book Writers and Illustrators, Romance Writers of America and Wisconsin Romance Writers of America.