PBG Christmas Titles: Once Upon a Christmas (Clare Revell) 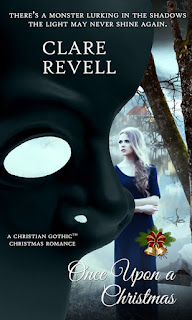 About Once upon a Christmas:

As settlement for her father’s debts, Caitlyn Hosier is forced into a marriage with the village recluse—a man no one has seen all the years he's lived in the manor house. A man surrounded by rumours. A man with a vicious temper. A man said to be a monster. A man who hates Christmas.
Hayden Shade hides his scars behind a mask, but the past never ceases to haunt him. A new life and a new start seem too much to hope for. Does he even deserve one? Surely not with a woman so wholly beautiful as Caitlyn. He longs to build a life-long relationship, but he daren’t allow her to see the real him until he knows for sure she loves him.
Desperate to find happiness with the man she's fated to marry, Caitlyn determines to uncover the real Hayden Shade. There must be something good behind the mask. But what if there's nothing more to him than the monster she could never love?

Excerpt:
Carols played in the background. Caitlyn Hosier grinned at best friend Meredith Mantle. “Who’d have thought this time last year we were preparing for the Paradise Christmas Ball, and here you are married.” She paused. “And here I am, not. And neither of us are going to the ball, either.”
“It’s a shame things didn’t work out with Ty.” Meredith hung another ornament on the tree. “We’d have been related.”
Caitlyn shook her head. “Ty’s a nice enough bloke, but we have nothing in common. And I’m beginning to lose hope in David as well. He still hasn’t called since that one date he took me on. I know he’s far older than me, but age is simply a number, right?”
The door opened and her father and step-mother came in. Father cleared his throat, his face serious and pale. “Caitlyn, I need to speak with you. It’s urgent.”
Meredith stood. “I should be getting back. I promised Grannie I’d call in on my way home. She’s coping OK on her own, but she’s finding it hard with the anniversary coming up.”
Caitlyn walked Meredith to the door. “I’ll call later this evening. Bye.” She closed the door and headed back into the lounge. “So what’s wrong?”
Her father took a deep breath. “I got called in to see my boss. He made me an offer for your hand in marriage.”
Caitlyn’s stomach knotted and threated to eject her lunch over her feet. She pushed her hands through her hair. She must have heard wrong. “He wants to what?” she managed, reaching out a hand to turn off the music, the carols incongruous now.
Her father’s agonized gaze hit the floor, as if couldn’t quite bear to look at her. He seemed as if he’d aged fifty years since he’d left home a few hours ago. “He wants to marry you.”
“He doesn’t know the first thing about me. Why would he want to do that?”
“Because I messed up. I did something I shouldn’t have and this is the only way he won’t press charges.”
Caitlyn swallowed hard. “Press charges?”
“I broke the law. I’d go to prison for a long time, possibly the rest of my life.”
Shock turned to horror. “So you traded me for your freedom?”
Her father shook his head. “No. I’d never do that to you. This is your choice and yours 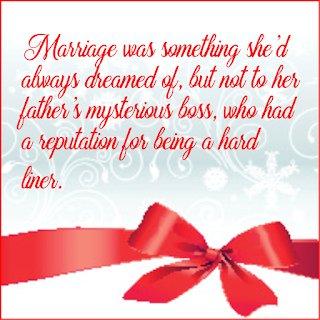 alone. He granted me that much.”

Caitlyn turned to her step-mother. She didn’t really remember her birth mother, only a faint recollection of perfume. Naomi had never wanted to replace Mum, opting instead for the term Auntie. “Auntie Naomi…”
“I’ve spoken to Naomi,” Father interrupted. “She’s in agreement with me.”
She turned away, her eyes burning. Marriage was something she’d always dreamed of, but not to her father’s mysterious boss, who had a reputation for being a hard liner. Caitlyn’s dreams lay with David, a local man from the same church. He’d told her he worked in an animal shelter, which she’d found adorable. They’d been on one date and got on pretty well. But this? This would end all that. Now her dreams lay shattered at the foot of the half-decorated Christmas tree. Scattered like the box of baubles she’d dropped, sparking in the light, yet out of reach.
“How…how long have I got to think about it?” she whispered.
“I have to let him know by three.”
She gasped as she glanced at her watch. “That’s only an hour away.”
Her father hurried over to her and gripped her hands. “I’m so sorry. If there was a way around this, some other way I could make amends, I’d do it, but there isn’t.” His gaze held hers. “If you can’t do this, if you don’t want to, then don’t worry. I’ll face up to what I’ve done and accept the consequences.”
Caitlyn pulled her hands away. “I need time to think. I’ll be in my room.” She dashed from the room, before she really did cry. She shut the bedroom door and leaned against it. “Oh, Lord, what do I do?” she whispered. “I can’t let Father go to prison, but to marry someone I don’t know? Someone no one has ever seen or really knows? Someone with a reputation like Mr. Shade has? Even the name makes him seem dark.” She shivered, wrapping her arms around herself as she paced to the window. “I wanted a future with David. He’s tall, charming, handsome, and he likes me. He took me to the most expensive restaurant in town, and then kissed me on the doorstep when he dropped me home. OK, bells and whistles didn’t go off and the stars didn’t explode, but for a first kiss I wasn’t expecting that.”
Caitlyn sighed, studying the view of her garden. “I have to do this. Please promise me I’m not doing this alone. I have no idea if this Mr. Shade is a Christian or not. So I may well end up unevenly yoked. If I can ask one favour, Lord, please let it be a church wedding. Work this horrid situation for good.”
Her gaze fell on the verse-of-the-day calendar on her desk. The one for today was Joshua 1:9. “Have I not commanded you? Be strong and courageous. Do not be afraid; do not be discouraged, for the Lord your God will be with you wherever you go.”
“Thank you, Lord. OK, let’s do this.” She rubbed her hands over her eyes and sucked in a deep breath. Should she take everything? Would she be allowed home to get things she forgot? What did she do now?
Her hand rested on the locket her birth mother had left for her, along with a note saying ‘sorry’. The note had long since been discarded, but the necklace she’d kept. Not that it was ever worn—it didn’t really go with the jeans and baggy sweaters she preferred—but she’d take it with her. Decision made, there was no time to waste on questions she couldn’t answer.
Father paced the living room floor. He stopped mid-stride as Caitlyn entered the room. “What did you decide?”
“I’ll do it. I’ll marry Mr. Shade.”

Clare is a British author. She lives in a small town just outside Reading, England with her husband, whom she married in 1992, their three children, and unfriendly mini-panther, aka Tilly the black cat. They have recently been joined by Hedwig and Sirius the guinea pigs. Clare is half English and half Welsh, which makes watching rugby interesting at times as it doesn’t matter who wins.
Writing from an early childhood and encouraged by her teachers, she graduated from rewriting fairy stories through fan fiction to using her own original characters and enjoys writing an eclectic mix of romance, crime fiction and children's stories. When she's not writing, she can be found reading, crocheting or doing the many piles of laundry the occupants of her house manage to make.
Her books are based in the UK, with a couple of exceptions, thus, although the spelling may be American in some of them, the books contain British language and terminology and the more recent ones are written in UK English.
The first draft of every novel is hand written.
She has been a Christian for more than half her life. She goes to Carey Baptist where she is one of four registrars.

Sign up for Clare’s newsletter
Posted by Delia Latham at 1:30 AM