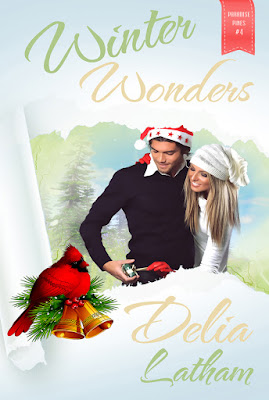 Kalani (Winter) Wonder has much bigger plans than being a local news anchor. National plans…maybe even international. She certainly won’t be stuck in Cornelius Cove, California for the rest of her life. She’s going places. Big places. Faraway places. Grand places she’s only dreamed of so far.
Then her brother’s little puddle-jumper plane crashes in the Cambria pines, leaving them both stuck in a lovely old fishing lodge with a strange-but-wonderful lady who has a knack for making Winter’s mind go places it doesn’t want to go. Places like Heaven, and God…and love.
Pastor Brady Merckle leads a quiet life, far from the one he led as a youth, and he likes things just the way they are. Then Winter Wonder lands in Cambria, and he enjoys the beautiful anchor woman’s company far too much. Brady doesn’t need an over-curious reporter digging into his past, and besides, Winter doesn’t know God. He’d best stay a whole village away from her.
But when he’s hired to spruce up Paradise Pines Lodge, he and Winter find themselves thrown unavoidably together.


Winter has landed, and a Miracle is about to happen.

WHAT HAD EVER POSSESSED HER to climb into this jelly-bean-sized airplane?
Winter could have driven the five hours from Cornelius Cove to Santa Barbara, but her editor was antsy for the story she’d be bringing back. Using the rental plane pared a good many hours off her time away from the anchor desk at CoastNews, a television news channel covering California’s Central Coast.
She had jumped on the opportunity for a bit of alone time with her twin brother, who piloted the C-Cove Flying Taxi planes. They were both busy climbing often unstable ladders to success in fledgling careers, and opportunities for visits of any length came along all too seldom.
“Hang on, Sis.” Winter heard the string-tight tension in Kai’s warning only because she knew him so well. The crease in his brow didn’t make for a warm, fuzzy feeling either. “I’m gonna have to take ’er down, and the landing’ll be about as smooth as an over-aged pineapple’s skin.”
The little puddle jumper dipped in a sickening cant to one side, and Winter’s eyes widened at sight of the ground, way too far below. She gasped and balled her hands into tight fists, but managed a shaky smile at her brother’s terminology. Born to a Navy dad from northern California and an island mother, she and Kai had been raised in Oahu, Hawaii. Even now, after a decade in California, they often thought and spoke in terms influenced by Hawaiian culture.
“We’ve survived rough stuff before, Kai. Just do your best, it’s always good enough.”
Kai struggled to right the wavering aircraft, but glanced her way for half a second. “I love you, Kalani. You know that, don’t you?”
Oh, yeah…they were in serious trouble. Under normal circumstances, he would never risk the sharp end of her tongue by using the name her parents gave her. She’d taken on a “stage name” when she went on the air for KCCN, and insisted her family use it and learn to think of her by that name. When her parents balked, she reminded them that she had kept the family surname. Although Kai didn’t see the need for a name change, he stepped in to support her choice, and their parents eventually acquiesced—although they clearly considered it a ridiculous and unnecessary move on her part.
So Kalani became Winter Wonder. A name that zipped and zinged, sizzled and sang with so much more dramatic punch and memorability than did her given name. This was a moniker fit for a celebrity—and that’s what she intended to be. A celebrity.
And now Kai had called her Kalani. He did so now and then, but usually with tongue in cheek, a deliberate ploy to get her dander up. She wished he was being a tease of a brother right now, but his voice and expression wrecked any hope of that. Her heart clenched, even as the plane took a sharp nose dive toward the ground.
“I love you too, brother mine.” She made a noisy show of checking her seat belt. “Now shut up and cut the rough stuff off that ancient pineapple.” 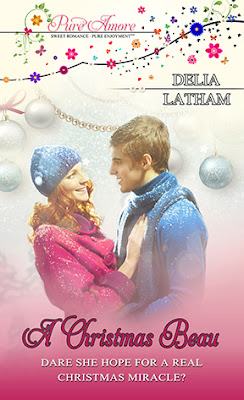 About A Christmas Beau

Katie Knowles’ life is going just as she planned. Even her long-time crush on her sister’s boss, Cameron Hilliard, has fallen into place. The two have become what most people consider “an item,” and Katie knows Cameron cares for her. Deeply. But something keeps him from committing completely to their relationship.
Cam finds himself wading the murky waters of love a bit later than most men. He’s thirty-two when the love bug finally bites. At twenty-four, Katie’s so young. So pure. So innocent. Although he’s at peace with his past and has found Christ, Cam can claim none of those things. Is it fair to ask a special woman like Katie to tie her future to his?
Then Katie comes face to face with a ghost from a part of Cam's past he’d like to erase, and he faces the very real possibility of losing her. Suddenly their differences no longer matter. He has to find a way to set the situation right, face the consequence of his most shameful secret, and win back Katie’s trust and love.


But when the clock strikes midnight on Christmas day, it’ll be too late. Is their faith and love strong enough to bring them a real-life Christmas miracle?
Kindle          Pub/Mobi/Adobe

From his booth in Santini’s Italiano, Cameron Hilliard kept an eye on the entrance. His lips curved into a wide, unstoppable grin when his date appeared in the doorway. He could no more have held back that smile than he could’ve stopped the sun from shining.
Katie Knowles possessed some kind of ‘magic’ that made smiles happen—and Cam wasn’t alone in feeling its effect. A quick glance around the vicinity revealed at least a half dozen pair of eyes fixed on the tiny, auburn-haired woman in the arched doorway—every one of them accompanied by a big, happy, helpless grin.
He stood, and her green gaze found him in an instant.
Katie accepted the discreet brush of his lips against her cheek. “How was your day, Cam?”
Her sweet smile wrapped itself around his heart and squeezed hard. He pulled air into his lungs, wondering for the hundredth time what he was doing. Every minute he spent with this beautiful woman was one moment deeper under her spell, one smile closer to losing his heart forever…and still he kept coming around. What was he thinking? What in the world had possessed him to risk a relationship with a woman so young, and so far out of his league?
He bit back a chuckle at his slight mental exaggeration. At twenty-five, Katie was eight years younger—enough to make their formative experiences somewhat different, but not so much that the gap made a relationship impossible.
He looked at her across a candlelit booth overhung with grape vines and twinkling lights. “Maybe you should tell me about your day, Katiekins. It’s bound to be more interesting.”
“You first.” Katie blasted him with a thousand-watt smile, effectively dousing any sensible thought he might have had. “I want to know about every second you spent away from me.”
He smiled back—something he’d done a far sight more since Katie came into his life—and laid an open hand on the table. She slid hers into it without hesitation, big green eyes lit up like emerald stars.
Cam, my man, there’s no hope for you. You’re a goner.
“Every second?”
“Uh-huh. From the moment you opened your eyes this morning until this very moment.”
“That’s a pretty tall order. I’d really hate to bore you with the details of my humdrum Friday. I didn’t do anything worth talking about.”
“Everything you do is interesting to me, Cam, because…well, because you’re you.”
How many women would be so open about their feelings?
In the name of honesty, he had to admit that he’d almost certainly be uncomfortable with that degree of candidness in most women he’d dated. But not this woman. Katie’s forthright demeanor refreshed him, made him feel vibrant.
And that’s what scared him all the way to his core.
Was it possible he was just caught up in her youthful exuberance for life? Maybe what he felt for her wasn’t real. And maybe that light in her eyes when she looked at him was no more than a crush on her sister’s boss.
“Cam?” Her voice held an uncertain edge. “Is—is something wrong?”
He laughed and squeezed the hand he still held. “What could possibly be wrong? I’m in the company of a sweet, smart, beautiful woman who seems to actually enjoy being with this old geezer.”
“I love being with you, you know that—and you’re not old.” Her auburn eyebrows took a dive toward each other, while green eyes flashed her displeasure. “Why do you insist on thinking of yourself like that?”
“Maybe because you’re so young.” He grinned, knowing she wouldn’t let him by with that comment.
“I’m not that much younger than you.” She narrowed her eyes, causing an adorable crease to show up between her eyebrows. “An eight-year age difference doesn’t make you a cradle robber, and besides—" An impish smile lit her face. “You didn’t exactly kidnap me.”
“Well, that’s true.” That little spark of fire. He loved it—especially when paired with her fun-loving personality. “You kind of leaped out of the cradle and into my waiting arms, didn’t you?”
“Yep, and I’d do it again, so no more self-deprecating comments about your age…old man. Got that?”
“Got it.”
“Good. Then let’s start over. Tell me about your day.”
“Well, it wasn’t bad. Belle and I made a few customers happy, closed a couple of accounts, and contracted another one or two. That’s a good day. But…”
“But what?”

Writing Heaven’s touch into earthly tales, Delia Latham puts her characters through the fire of earthly trials to bring them out victorious by the hand of God, His heavenly messengers, and good, old-fashioned love. You’ll always find a touch of the divine in her tales of sweet romance.

Delia lives in East Texas with her husband Johnny. She’s a Christian wife, mother, grandmother, sister, friend, and author of inspirational romance…with a finger or two immersed in the design pool, where she creates beautiful marketing material for other authors. She treasures her role as child of the King and heir to the throne of God. She’s got a “thing” for Dr. Pepper and loves hearing from readers.