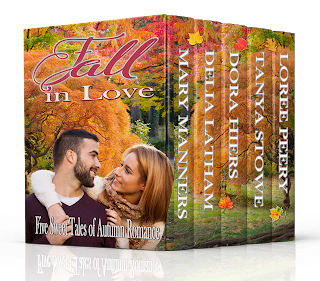 FALL IN LOVE: FIVE SWEET TALES OF AUTUMN ROMANCE
is a collection of FIVE romance novellas, by FIVE award-winning authors. Each heartwarming story takes place during the beautiful autumn season. You're guaranteed to find something that makes your heart "go pitty-patter." And what a way to anticipate the fall...cooler temps, gorgeous colors, and love in the air!

Here's a blurb from each of the five stories:

BE SWEPT AWAY IN FIVE HEARTWARMING ROMANCES WITH AN AUTUMN FLAIR...

CAPTIVE AT SEA
by Mary Manners

Claire Mulvaney’s benevolent spirit has her biting off more than she can chew when she spearheads a charity fishing event to raise funds for Winding Ridge’s overcrowded animal shelter and is forced to call on fishing expert Sean Maguire.

Sean blames himself for his brother’s death. He spends his days in mourning and when Claire turns to him for help, he chases her off with gruff words meant to fortify his distance from the pain that has taken hold of his soul. But the enchanting woman with emerald eyes captivates, and Sean soon finds himself drawn to her warm-hearted enthusiasm.

NEVER THE TWAIN
by Delia Latham

Thanks to a younger brother who made it big in Hollywood and then estranged himself from his family, rugged Texas horse rancher Ryder Hayes sports oversized chips on both very broad shoulders toward celebrities. He’s not convinced any good at all can come out of Hollywood.

She’s prim and proper to a fault. He’s fun-loving, with a streak of pure mischief. Ryder’s a good man, but not a Christian—not by a Texas mile. Cass can’t remember missing a single Sunday service since childhood. They’re the epitome of polar opposites and never the twain shall meet…or so the saying goes.

Receiving a Dear Rand email while serving his country didn’t douse the fire in Rand Tenneson’s heart for his high school sweetheart. Fully committed, nothing quenched that love, not even news that Bryanna married. Back home now, Rand enjoys a busy life, firefighting and clowning around with patients at the children’s hospital. But a chance run-in with his ex-girlfriend, now a widow, rekindles that spark. God put her back in his life for a reason, and he vows to be there for her.

Ten years ago, Bryanna Fenwick shattered two hearts, hers and Rand’s. But the Navy SEAL, deployed across the world, couldn’t rescue her from the real fear she faced at home. She made a choice and lived the lie for a decade. When Rand discovers the truth, she fears she’s hurt the handsome firefighter yet again and destroyed her relationship with her daughter. Can God’s grace overcome such a ginormous lie? Has He brought them back together for a second chance at love or only to reveal the truth?

WITHOUT A SONG
by LoRee Peery

Still reeling from the loss of her husband, young widow Roni Marsden resolves to be strong for her precocious daughter. Invited to stay on the cleansing hills of her friend’s Nebraska ranch, she tries to figure out the next step. Should she leave Norfolk? Could she find work?

Songwriter Dawson Bennett returns home to his brother’s ranch when the production company for his first album goes bust. He searches his heart for new songs he's unable to write. Even as he seeks direction for his career, he attempts to mend the past with his elderly father.

Back in high school, Dawson had crushed on the lovely Roni when she dated his brother. Those emotions are reawakened when he discovers Roni and her daughter at the ranch. Protective feelings for the child, as well as for a stray pup that arrives on the scene, work together to soften his bitterness. Will these connections enable him to write lyrics that honor God?

Two years after her husband’s tragic death, middle-aged widow Rylie Thornton struggles to raise her three sons while keeping the family business in the black. As the lush colors of her favorite season display, she finds herself struggling.

Heart surgeon Micah Haden, on a rare break from his demanding profession, finds his sister’s friend a lovely mystery. He’s happy to help Rylie and her boys prepare for an upcoming autumn event. Why can’t she accept his offer with a little more grace? Is there a chance he could become one of Rylie's treasured Autumn Loves?

Posted by Delia Latham at 5:46 PM No comments: