Christmas Extravaganza: Down in Yon Forest 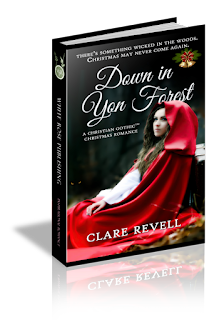 There will be trouble in Paradise this Christmas.

Having suffered a panic attack during a performance, violinist Meredith Stranraer flees to the small town of Paradise where her grandparents live. For some strange reason, they don’t want her around, and their rejection is more than unsettling. It’s downright alarming.
Jeremiah Mantle is the local forest ranger. His assignment is to watch the girl in the red cloak from a distance--to protect her as well as the forest. Falling in love, however, is definitely not in his job description. But it becomes increasingly harder to deny their mutual attraction.
But this Christmas, something wicked waits in the woods, and a dark past seems determined to rip them apart. 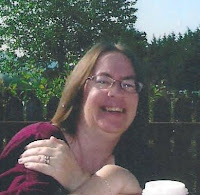 Clare is a British author. She lives in a small town just outside Reading, England with her husband, whom she married in 1992, their three children, and unfriendly mini-panther, aka Tilly the black cat. Clare is half English and half Welsh, which makes watching rugby interesting at times as it doesn’t matter who wins.

Writing from an early childhood and encouraged by her teachers, she graduated from rewriting fairy stories through fan fiction to using her own original characters and enjoys writing an eclectic mix of romance, crime fiction and children's stories. When she's not writing, she can be found reading, crocheting or doing the many piles of laundry the occupants of her house manage to make.

Her books are based in the UK, with a couple of exceptions, thus, although the spelling may be American, the books contain British language and terminology.

The first draft of every novel is hand written.

She has been a Christian for more than half her life. She goes to Carey Baptist where she is one of four registrars.

She can be found at:

I so enjoyed this Christmas tale -- and, oh what mesmerizing cover art! That alone would make me want to read the book, but here's a little secret...what's inside lives up to the promise delivered by that killer cover.


Meredith and Jeremiah’s attraction is instant and I always love a little spark that catches right away and builds throughout the story, ultimately becoming a force to be reckoned with. Shadows of a familiar fairy tale are delicately wound through the tapestry of this story line, in a bright, riveting thread that demands to be followed from beginning to end. An underlying mystery tantalizes—quietly seduces the reader’s attention, yet doesn’t overpower. Ms. Revell walks that subtle line with grace and finesse. Completely enchanting!

What inspired you to write Down in Yon Forest?

I’ve always loved fairy stories. In fact, the first stories I ever wrote in primary school, which I still have because Dad kept the books (!), were rewrites on Little Red Riding Hood and the Big Bad Wolf. Over and over and over. Don’t think I wrote anything else. Then I thought about putting it in a modern setting and this is the result.

Ironing and dusting come a joint first in the dislike stakes. I have to have ‘ironing music’ on, because I iron in time to the music and it gets it done faster. Dusting is done when it has to be… ie, when my parents come over.

I love cooking. Which is just as well, as no one else much does it in my house. Though now the girls are older, they have one night a week when they cook. I prefer proper dinners, not get it out the freezer and chuck it in the oven dinners.

Please share a verse of scripture that is especially meaningful to you, and why it is special.

Well, again there are two. The first one hangs over my bed and has done since I was three or thereabouts. It’s actually in the Bible twice. 1 Peter 5:7 and Psalm 55:22. It just reminds me of no matter what there is Someone out there who has my back, even when it doesn’t seem like it.

(Walk in obedience to all that the LORD your God has commanded you, so that you may live and prosper and prolong your days in the land that you will possess.)