Who Do You Think You Are?

I love to write characters who find healing in their lives after discovering their identity in Christ. Janie Littleton in my latest novel, Restoration of the Heart, has always lived in the shadow of her beautiful, older sister. Janie is a bit overweight, wears glasses, and isn't exactly pleased about her appearance. No guy would ever find her attractive, so why bother to lose those extra pounds. When the state of Idaho hires her as historian to oversee the restoration of a hundred-year-old mining town, she accepts.

Luke Chamberlain owns the construction company hired to restore the 1890s historical buildings at Silver Cliff Ghost Town. Though now a Christian, Luke once dabbled in the world, including his engagement to the gorgeous woman crowned Miss Idaho two years before. He saw her narcissism and now wants nothing more to do with the shallow lifestyle she represents. When he meets the godly woman Janie Littleton, he sees beauty instead of a Plain Jane, as she's labeled herself.

When Luke proclaims his love, Janie believes he's merely playing with her heart. Surely when their project is finished, Luke will return to the big city of Coeur d' Alene and forget all about her.

Janie reads her Bible but has never taken seriously 1 Samuel 16:7 where Samuel is choosing Saul's replacement for king of Israel. "But the Lord said to Samuel, "Do not consider his appearance or his height, for I have rejected him. The Lord does not look at the things people look at. People look at the outward appearance, the Lord looks at the heart."

Part of the inspiration for my heroine in Restoration of the Heart came from something that happened years ago. Way before I wrote my first novel, I used to teach elementary kids. I participated in a program with the local university in my city in which they placed a student teacher in my classroom.

One of my student teachers was so gorgeous, she could've won a Miss America contest. But because of some personal issues in her life, she became quite difficult with which to work. Some days, in my own frustration, I saw her, not as beautiful, but unattractive. I don't mean to speak ill of her, but I perceived the disagreeable behavior, not the outer appearance.

On the other hand, I've known others whom the world probably wouldn't label as attractive but were beautiful in my eyes because I looked into their souls—that part of them where our Lord dwells.

In many ways, I, too, think like Janie. I'd never make it into a Cover Girl ad or a Ralph Lauren commercial, but my confidence comes from knowing how God sees me as He looks upon my spirit redeemed by the precious blood of Jesus.


About RESTORATION OF THE HEART 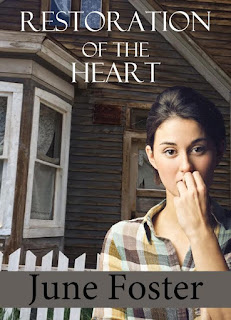 Though a Christian, Luke Chamberlain ignored his values and indulged in his beautiful fiancé's world of alcohol, parties, and nights at her apartment. After rededicating his life to the Lord, he vows never to fall into the lifestyle again. When the state of Idaho's Tourism Department offers his construction company the contract to renovate Silver Cliff, an 1890s silver mining ghost town, he accepts.

Janie Littleton studied history in college because life in the past is simpler than the uncomfortable reality of the present. With her extra pounds, eye glasses, and mousy brown hair, no man would find her attractive. When she's offered the job of project historian at the restoration of Silver Cliff, she accepts. But as Luke Chamberlain shows an interest in her, she doubts his sincerity. To make matters worse, someone claiming to be the miner who founded Silver Cliff in 1890 intimidates her with frightening midnight visits.

Can Luke convince Janie he's in love with the godly woman she is? Can Janie hold onto her faith as she's harassed by frightening appearances of old Ezra Barclay who died a hundred years ago?

About the Author
An award-winning author, June Foster is a retired teacher with a BA in education and MA in counseling. June's book Give Us This Day was a finalist in EPIC's eBook awards and a finalist in the National Readers Choice Awards for best first book. Ryan's Father was one of three finalists in the published contemporary fiction category of the Oregon Christian Writers Cascade Writing Contest and Awards. Deliver Us was a finalist in COTT's Laurel Awards. June has written four novels for Desert Breeze Publishing. The Bellewood Series, Give Us This Day, As We Forgive, and Deliver Us, and Hometown Fourth of July. Ryan's Father is published by WhiteFire Publishing. Red and the Wolf, a modern day retelling of Little Red Riding Hood, is available from Amazon.com. The Almond Tree series, For All Eternity, Echoes From the Past, What God Knew, and Almond Street Mission are available at Amazon.com. June enjoys writing stories about characters who overcome the circumstances in their lives by the power of God and His Word. Recently June has seen publication of Christmas at Raccoon Creek, Lavender Fields Inn and Restoration of the Heart. Visit June at junefoster.com.
Posted by Delia Latham at 1:30 AM