I plot and plan my books. But sometimes life interrupts those plans. Here’s the latest example.

This blog with Delia was scheduled at the beginning of 2017 when I fully planned to have the fourth (and final) book in the PROMISES Series published.

Sadly, that didn’t happen. Instead, I suffered from the prophetic words found in one of Robert Burns' poems. “The best laid schemes o' mice an' men / Gang aft a-gley.”

You probably recognize the quote better as “the best-laid plans of mice and men often go awry.”

My writing timetable for the PROMISES series imploded with an unscheduled relocation last summer. Finding time to write slipped away replaced with house hunting, packing, unpacking, and resettling.

No matter how much or how carefully we prepare and plan, life does happen and disrupt plans. I believe that all things happen within God’s perfect plan for our lives, but that doesn’t make the disappointment or results of plans gone awry any less disappointing.

I was ready to give up on the series, but my characters wouldn’t allow me to quit. They shouted in my head, how could you ignore your promise to tell our stories? A tough question considering the series theme is about keeping promises!

Not only were my characters protesting, everywhere I looked articles and announcements about the recovery of POW/MIA remains missing in military actions after years and years caught my attention. I viewed it as more confirmation that Shirley and David’s story need to be told.

With renewed determination, I started again with a new schedule to complete the series. Until He Returns, the book announced for last summer now releases this month and the last book in the series, the one I’d scheduled for this blog, will now release in 2018.

Have you had any of your plans go awry?

Share your experience in the comments below along with your email address and be entered in a drawing for a free eReader copy of Until He Returns, Book 3 of the PROMISES series.

About Until He Returns: 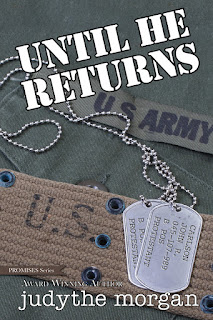 Shirley Carlson’s husband has been MIA in Vietnam for decades. She’s filled her life with family, friends, her business, and David Sands’ companionship. Now David wants more. Only she wants her husband home and buried before she moves forward with another relationship.

David Sands has loved Shirley for years, patiently waiting for her to come to terms with her husband’s death. After one last assignment to the Middle East, he’s retiring from the Army. All he wants is Shirley at his side, as his wife. He proposes before he deploys.

Will Shirley make a commitment without closure to her past life, or will she watch her new love walk away?

Her diverse experiences bring life to her characters and her stories. Her belief in true love, second chances, and forgiveness means you’ll always find a happy ending.

She’s a member of American Christian Fiction Writers and Romance Writers of American.

You can connect with Judythe on

Goodreads
Posted by Delia Latham at 1:30 AM